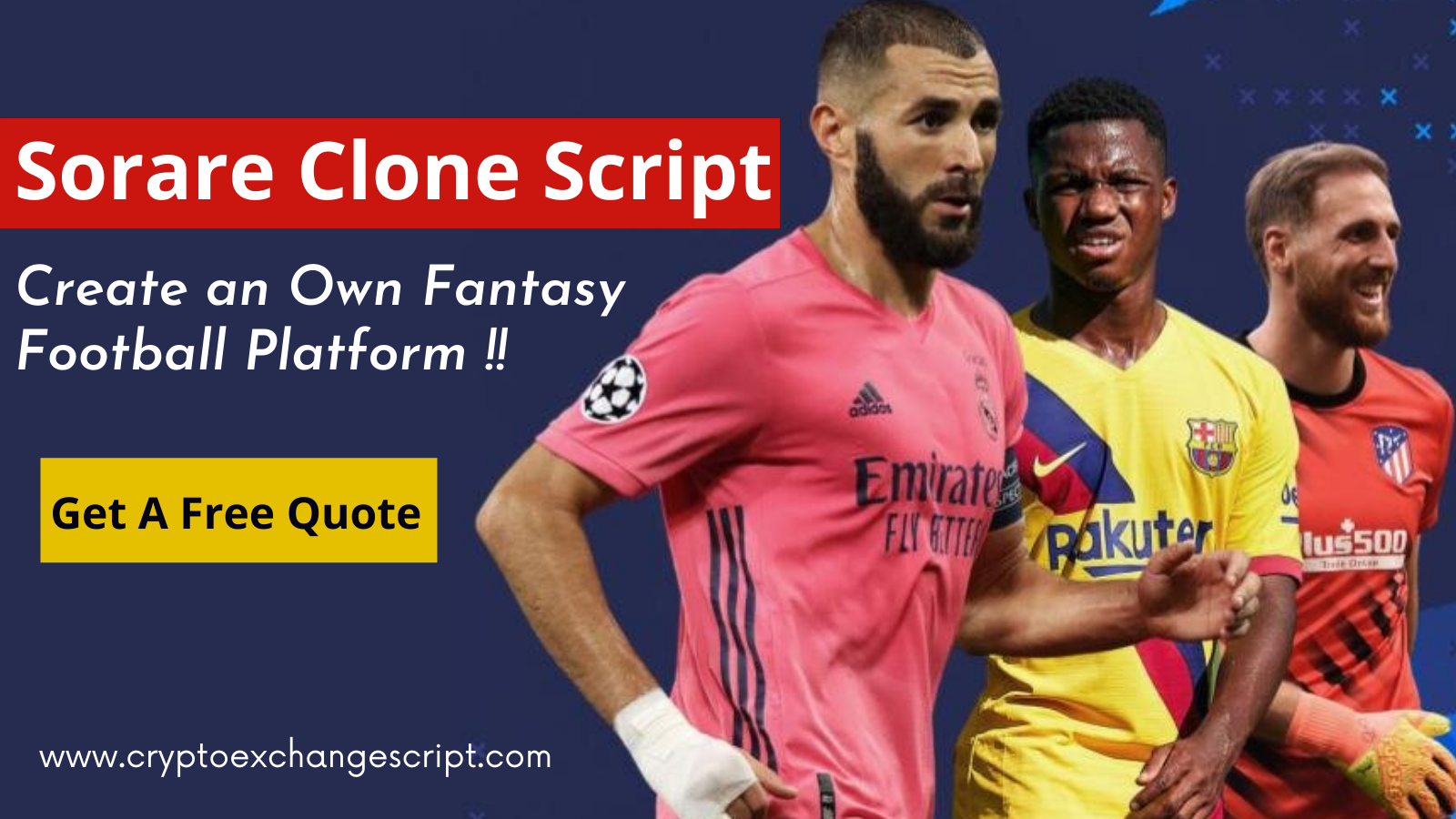 Sorare Clone Script is a NFT based football game clone script built on blockchain where you can earn prizes for managing your own team, trading virtual playing cards, and participating in tournaments. Sorare Clone has the features of your player cards are Non-Fungible Tokens (NFTs), which means there will only ever be a limited number of them and it also designed like the concept of rarity enters the picture. Due to the fact that each player will only ever receive a limited number of cards, they become increasingly valuable as time passes.

Coinjoker is a topmost NFT game development company that provides 100% white label sorare clone script that develops with cutting-edge technology solutions that are contemporary. As an admin you can gain complete control over the creation and management of our own digital collectibles. It allows you to gain points based on your actual performance on the field.

Get A Free Live Demo of Sorare Clone Script

Sorare Clone Development is a process of designing and developing a digital fantasy football game platform like sorare on the Ethereum network where you can acquire tokenized digital trading cards. Sorare Football clone allows you to buy, sell, and trade cards with other internet users in a fantasy soccer game with true digital ownership.

As a leading Blockchain Game Development Company, Coinjoker offers 100% ready to deploy sorare clone script with the prime and advanced features and secure admin panel functionalities to launch your own football gaming platform at an affordable cost.

Create Sorare football game clone resembles like NFT marketplace which is one of the most reputable venues for tokenized digital cards in the game world.  Sorare NFT marketplace development where gamers may collect, scout, and exchange the platform's official digital cards. As an admin you allow your traders to create tokens and quickly resell your digital crypto-collectibles as tokens at NFT Marketplace Development like Sorare.

Sorare NFT football clone is a soccer fantasy game clone script where participants sell, buy, trade, and manage a soccer team. Football players in Sorare gain points by putting together lineups each week. They are awarded points based on the activities of the football players on the field. Instead of picking players from a list, you buy digital trading cards on the Ethereum blockchain with sorare.

You can market them as crypto-collectibles if you own this card. Sorare is a weekly soccer fantasy game that makes use of blockchain technology. Fans create a five-card team to compete against other Sorare soccer fans, and their performance is based on the footballers' primary performance during the week's football games.

White-label Sorare Clone Software is designed for business owners who wish to keep up with the latest trends while saving money. A global gaming solution that can give you a leg up on the competition. A trailer-made solution allows you to personalize your business platform according to your entrepreneurial goals.

When a lucrative trend enters the market, you must move with it. However, we do not have the time or resources to start from scratch. As a result, white-label solutions are thought to be the best way to keep up with the trend.

Coinjoker provides the best Sorare Clone Script and our unique features in Sorare combine a few things that people get enamored with—soccer, fantasy sports games, sports collectibles, and crypto NFTs—in a way that no other experience has done before.

NBA Top Shot is Sorare's most recent crypto NFT collectible, however, aside from individual collection-based challenges, the basketball NFT series has no true "game" element. Even though there is a definite pay-to-win element to Sorare, it includes actual, fantasy-style competitiveness. There are meaningful benefits with the potential thrill of victory for die-hards who are willing to pay real money for the top squad.

How does Sorare game clone works?

In the game, you can join a variety of leagues, including a rookie league for regional leagues, newcomers, and even one for lineups with young players under the age of 23. Once you've joined a league, you can design a new lineup each week using the cards in your account. At the end of the week, The top Sorare users are eligible to win ETH and rare cards as prizes, while in-game points are accumulated based on all of the players' real-world performances.

Why are Sorare cards so rare?

All of your player cards are labeled as Non-Fungible Tokens (NFT), which implies that each player will only ever have a fixed, predetermined amount of cards.

NFTs are tokens that can be used to signify an item's ownership. From artwork to real estate to collectible cards, there's something for everyone. This cutting-edge technology may grant ownership of a certain item, both real and virtual, to only one person at a time, and the numerous platforms that allow smart contracts keep this unique identification safe (digital contracts that exploit blockchain technology to foil any kind of modification or counterfeiting of the ownership of an NFT).

The term "non-fungible token" refers to a token that is not fungible. A technical term used to characterize anything for which there are no simple counterparts is non-fungible. The so-called "fungible" things, on the other hand, are defined solely by their membership in a genus that includes a large number of objects that are all equal. A simple red apple, for example, will be a fungible good when compared to the many other red apples available at the grocery. The apple that landed on Newton's head, on the other hand, has no equal and will never be fungible with other red apples. As a result, it will gain a distinct value, and that makes it unique.

NFT Based Football Game is a profitable business in the digital world. These huge sums of money have attracted some of the world's most powerful investors. For such millionaires and gamers, Sorare has proven to be the greatest platform. Take advantage of this lucrative chance with the sorare clone script for cryptocurrency trading script. A team of crypto and NFT aficionados with a pool of knowledge delivers more benefits to your business with Coinjoker. If you’re looking to launch Sorare Clone Script, then Coinjoker is the best place you could find!.

The complexity of Sorare and its gaming areas and marketplaces necessitate Coinjoker developers' dependable knowledge.

Our team can implement additional features that you want to make your application stand out in addition to the Sorare functionalities.

Our cost-effective development processes allow you to spend and focus on improving the platform to provide a unique experience for your users.

Our support services ensure that any post-deployment difficulties are resolved quickly and that your users and gamers have a positive experience.

We can include your features and get it live in a few weeks because the white-labeled platform is pre-developed.

Get A Free Quote For Sorare Clone Script