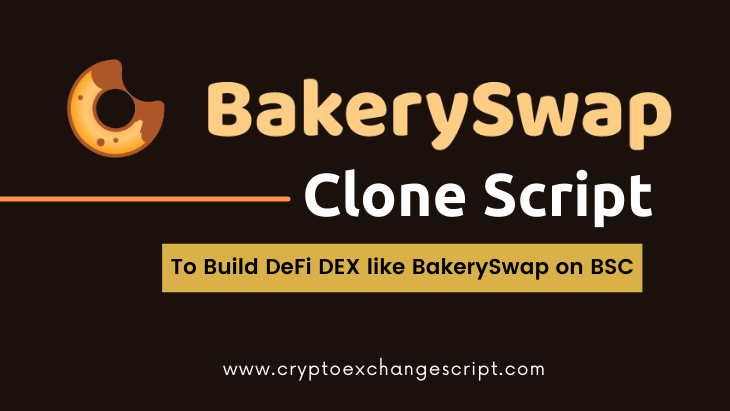 BakerySwap clone script offers various services like yield farming, a crypto launchpad, and non-fungible token investment opportunities, all on "one stop script" and is one of the many ways you can earn a passive income with DeFi.

Get A Free Live Demo of BakerySwap Clone Script

You can start DeFi Exchange like BakerySwap with BakerySwap Clone Script, it has build with immense features and functionalities of bakeryswap it works 100% replication of bakeryswap.

If you instantly wanna start DeFi exchange like BakerySwap, you can go with ready to deploy BakerySwap Clone Script, Which has the identical features present in bakeryswap exchange, So You can launch your Defi Exchange within 3 days.

Otherwise you can approach white label bakeryswap clone script it means build from the scratch, Where it has extra features and functionalities of bakeryswap exchange, you can customized as you need.

BakerySwap has a 0.30% fee for every activity on the platform, 0.25% goes to the liquidity providers and the remaining 0.05% will be used to buyback BAKE from the market and distributed to BAKE holders.
BackerySwap Clone Script Components

BakerySwap exchange clone script has no order book to match buyers and sellers. The trade happens against a liquidity pool. Supporters and users of the protocol provide the assets in each pool.

There are four kinds of NFT Combos, each requiring a different amount of BAKE.

BakerySwap Clone Script built with Bakery Gallery works as a curated NFT platform for top emerging artists. Some of the featured artists include SWOG, CoralCorp, CookieMunster, srnArtGallery, and Chiara Magni.

BakerySwap clone script is built with Launchpad is a platform for hosting IDOs. An IDO refers to the launching of a cryptocurrency on a decentralized exchange (DEX).

BAKE is the native token of BakerySwap. It is a BEP-20 token that users can earn by providing liquidity.BAKE plays its role as a reward for the liquidity providers and a passport to voting rights on the protocol

Get A Free Quote of BakerySwap Clone Development