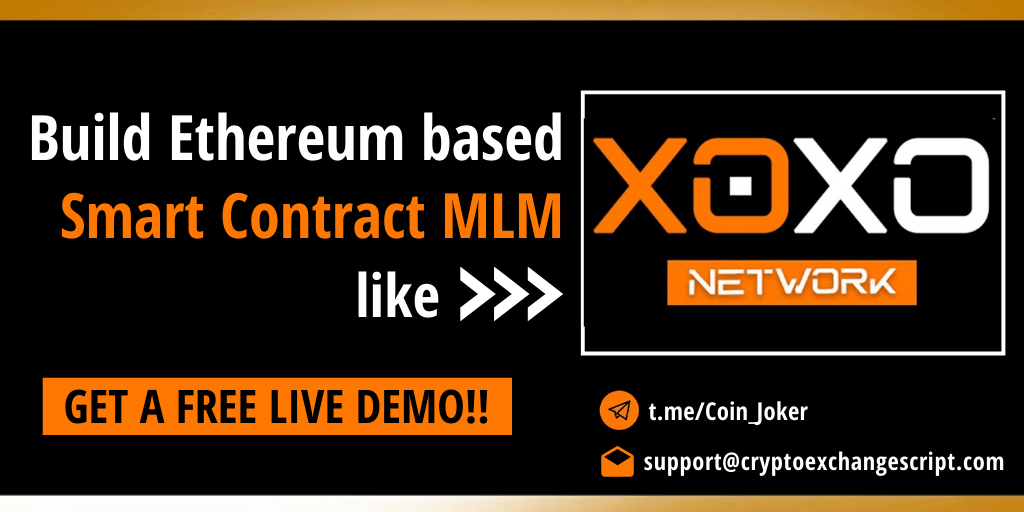 Since the build-up and emergence of cryptocurrency/bitcoin regulation, cryptocurrency-based multi-level marketing (MLM) business has been on the rise again under the guise of “blockchain”, “decentralized” and “smart contracts”. XOXO is one such appealing Crypto MLM opportunity based on Ethereum Blockchain, which is flexible in joining different global powerline autopools.

Let’s take a closer look at everything you need to know about XOXO Network,

The XOXO Network is a decentralized, peer to peer global powerline networking system that runs on set protocols with no admin or official authority. This Ethereum smart contract-based system requires members to choose between different smart contract projects that could potentially yield profits.

In reality, XOXO Network is nothing but a crypto-based cash gifting matrix cycler program. The Network uses Ethereum as the only method of payment that is member to member. Thus XOXO is the first-ever powerline network built on a smart contract, it protocols it's unshakable and unstoppable to work and serve everyone equally.

How Does the XOXO Network Smart Contract Work?

XOXO is a Smart Contract, that allows the automatic redistribution of ETH transactions between members. The program works with a Powerline, that is the registration of the members can be done one after the other according to the payment of the transactions in chronological order.

Normally Smart contract hold funds until it meets certain trigger/ conditions in the contract. However in the XOXO network, the smart contract does not hold or store any funds, rather it pays the funds directly right away into users wallets.

The XOXO network comprises all of the following features and benefits,

XOXO is a unilevel, straight line, first come, first served protocol based structure. The registration of the members will be carried out one after the other according to the payment of transactions in chronological order.

It is required for the members to download the Metamask wallet to their Chrome browser. For smart mobile users( both android and iOS ) it is recommended to download Trust wallet which is more comfortable.

It is mandatory for the member to fund their respective wallet with 0.1 ETH, to register for autopool 1. According to the smart contract protocol, this registration fee will be paid to the previously joined members and this process continues to applicable up to 4 levels.
To join Autopool 1, it is necessary for one direct referral, For autopool 2 to 7, there is no need for direct referrals.

Get free live demo to view, how our XOXO Network clone scripts works !!

There are 7 Global Powerline Autopools. Autopool is just a word for mentioning Matrix.

As we have already known, Startup amount is 0.1 ETH

You have to pay 0.1 ETH to get into Autopool 1 and it is distributed 4 levels up by supposed smart contract protocols.

Every new user has to pay the entry amount to the existing/ previously joined user from the user’s wallet to the user’s wallet. (which is completely Peer to Peer / P2P). As above mentioned, to qualify for earnings from autopool 1 member needs to personally recruit at least 1 person.

Level 2 – Member can earn 25% from the 2nd line of their network, 25% from their entry-amount 0.1 ETH that is 0.025 ETH, received From all level 2 referrals (referrals of your direct referrals)

Level 3 – Member can earn 15% from the 3rd line of their network 15% from their entry-amount 0.1 ETH that is 0.015 ETH, received from all level 3 referrals (from indirect referrals)

Level 4 – Member can earn 10% from the 4th line of their network, 10% from their entry-amount 0.1 ETH that is 0.01 ETH, received from all level 4 referrals (from indirect referrals)

Once a member completes the Autopool 1 he or she will earn back their 0.1 ETH and Autopool 1 will be opened for a lifetime with no re-entries but can still earn 50% commission on level 1.

Every existing user in this system gets paid from every new member and by automatic re-entries on Autopool 2 to 7. Once a member earned and cycled out from one Autopool, part of the member's earnings is paid back into the same Autopool so that consistent income is generated.

Hence, the profit-generating potential held in the latter few pools. This is a way to make passive income in the XOXO network. The profits generated under Autopool 1 for the above mentioned four levels are as follows: 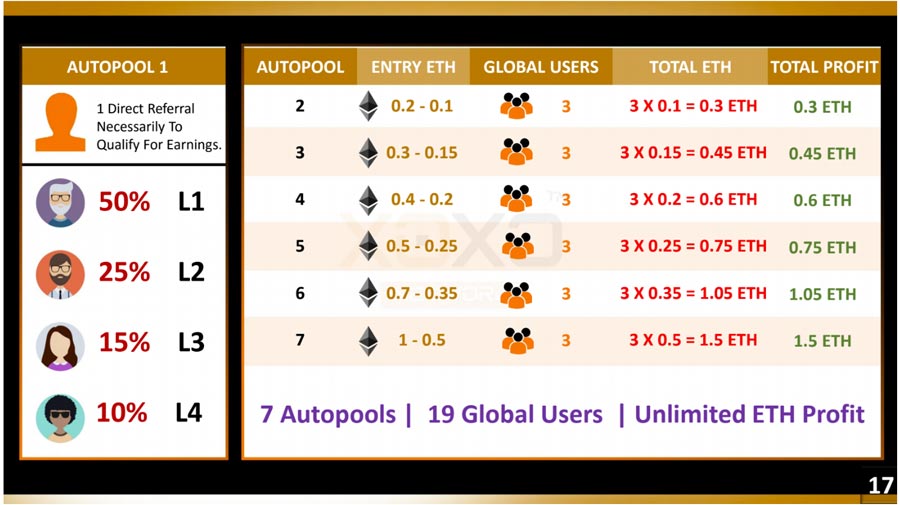 This structure gives members the opportunity to earn unlimited passive income through the overall growth of the XOXO network.

Start your XOXO network like MLM Clone, the Most Profitable and Powerful Platform To avail ETH to your traders In The Word Ever

Coinjoker- XOXO Network clone script is a smart contract-based MLM website script that works like the existing smart contract conditions in XOXO.run website and also we will add your desired requirements in your MLM platform. This XOXOX smart contract MLM is designed as unique and different from the rest of the online smart contract MLM business because it is integrated with Ethereum smart contract development, which ensures security while transacting your cryptos all over the world. Thereby we can customize the script for better performance and make your unique business ideas happen.

Coinjoker, as the acclaimed MLM Smart Contract Development Company offers high-end Smart contract MLM software along with fresh business models, highly responsive, and attractive UI/UX with a week. Our XOXO Network clone script allows you to work from home or any location of your desire as you watch and your business grows with crypto earnings.

We provide the Smart Contract (as a set of existing agreements defined in xoxo.run or you can add extra contract as you desire) as a constituted Ethereum Blockchain technology that describes an automated digital contract in MLM platform that cannot be broken or changed.

You can launch any of the above mentioned smart contract based MLM Clone scripts like Forsage, Etrix, Doubleway, Million Money within a week!!

Fill out the form below to get a live demo of XOXO Network MLM Clone Script!!