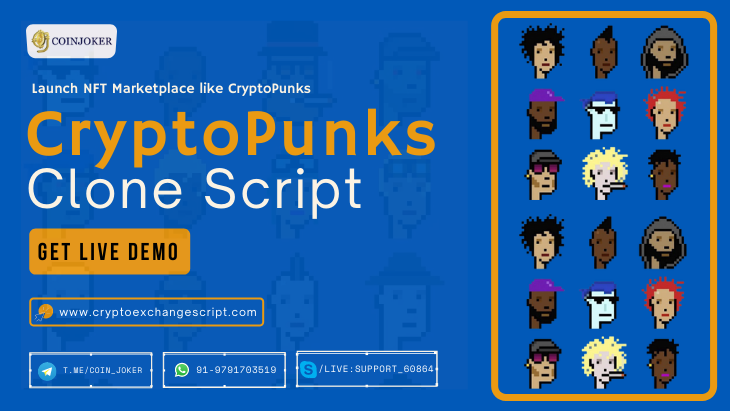 CryptoPunks clone script is 100% Ready to Deploy NFT Marketplace script for digital collectibles that are traded as Non-Fungible Tokens (NFT) within Ethereum network Like CryptoPunks. Coinjoker's CryptoPunks Clone is the exact replication of cryptopunks drives using ERC-721 tokens which are made up of 10,000 unique characters and features focusing on the 8-bit-style punks.

Coinjoker - A Leading NFT Marketplace Development Company creates a White label CryptoPunks Clone Script to build a NFT Digital collectibles like CryptoPunks where each punk has its own attributes and commands various prices, depends upon on the uniqueness of their features.

Get A Free Live Demo of CryptoPunks Clone Script

CryptoPunks Clone Development to create a NFT Marketplace which displays Digital Collectibles that are non-fungible, which means unique, irreplaceable, and not interchangeable. As Non Fungible Tokens, CryptoPunks Clone Script Development also works similar to cryptopunks does not have its own blockchain network and was instead created on Ethereum blockchain, in which the transaction history and token metadata are publicly verifiable, allowing traders to prove that they own NFTs like CryptoPunks.

ERC-20 token standard, these CryptoPunks are wrapped as ERC-721 tokens, making them tradable on other NFT marketplaces. The wrapping steps occurs on the website Wrapped Punks.

The composite image of all the Cryptopunks is too large to be stored on the blockchain, so Larva Labs took a hash of the image and stored it in the contract. The CryptoPunk Clone Script authentication process involves calculating the SHA256 hash on the individual CryptoPunks images and comparing the result to the hash embedded in the contract.

"There are 6,039 male Punks and 3,840 female Punks. A total of 696 wear hot lipstick, while 303 have muttonchops. There are 286 Punks with 3-D glasses, 128 rosy-cheeked Punks, 94 Punks with pigtails, 78 Punks with buck teeth and 44 beanie-wearing Punks," Christie's, an NFT auction site, said.
There are Male, Female, Zombies, Apes, and Alien punks with different mouths, hats, haircuts, and glasses.

The rare non-human CryptoPunks (aliens, zombies, and apes) tend to go for the highest prices, being sold for millions of dollars each.

Each CryptoPunks may be wearing a beanie, pilot helmet, hoodie, or 3D Glasses.

CryptoPunks Clone DApp Development is a term dapps are typically open source, decentralized, incetivized applications that run on a blockchain protocol such as the Bitcoin or Ethereum networks. CryptoPunk Clone Script is built using a Dpps on Ethereum Blockchain

How to make Buy and Sell in CryptoPunks Clone Script?

To Use the CryptoPunks Clone Script, download and install the MetaMask browser extension, through which you can authorize websites to access your Ethereum wallet. Using CryptoPunks Clone Development, the Larva Labs website will recognize and include buttons that allow you to bid on, buy, and sell Punks directly.

CryptoPunks Clone Software has a set of Coding or software program, each Cryptopunk vary from the other by possessing distinctive and randomly generated attributes. This motley Digital collection of CryptoPunks consists of men, women, apes, and aliens with diverse hairstyles, glasses, and hats.

The rarest of them all, CryptoPunk Clone Script has seven attributes, while other rare punks include green-skinned zombies, light blue aliens, and so on

Scarcity: there are only 10,000 punks in all, making them scarce.
Historical significance: punks are considered proto-NFTs, developed far ahead of their time.
Social Proof-of-Stake: serving as digital status symbols, punks give their owners credibility and substantial leverage for making profitable business deals.

Step 1: Set A MetaMask Wallet
Step 2: Get Some ETH
Step 3: ConnectConnet Your Wallet to CryptoPunks Clone Script
Step 4: Step 4: Select and Buy Your Digital Collectibles
Step 5: Need additional ETH for trading a punk because of the gas fees for such services.

There are only 10,000 CryptoPunks available, and each of them is unique. This makes CryptoPunks extremely scarce.

It is directly related to the limited supply factor, but it is also based on the attributes and the particular type of punk

CryptoPunks were free when they were first released. Some investors took advantage of this situation and got a hold of a lot of CryptoPunks from the get-go.

The liquidity of tokens is one of the most important factors worth considering when it comes to investments. Usually, when the price of a token increases significantly, its liquidity becomes much lower. This is not only the case with NFTs but also fungible tokens.

If you do not want to go through each value determinant one by one, but rather obtain an estimated value for a CryptoPunk immediately, you can use online NFT value estimators.

The rise of NFTs has made collectibles such as CryptoPunks one of the best ways to make big profits. Even though a CryptoPunk might be very expensive, the return on your investment is likely to make it all worth it.

CryptoPunks Clone Solutions We are a team of technical blockchain developers and subject matter experts who work together to not only offer quality development solutions but also guide you on how to create NFT token and NFT Digital Collectibles platform development similar to CryptoPunks.

Get A Free Live Quote For CryptoPunks Clone Script