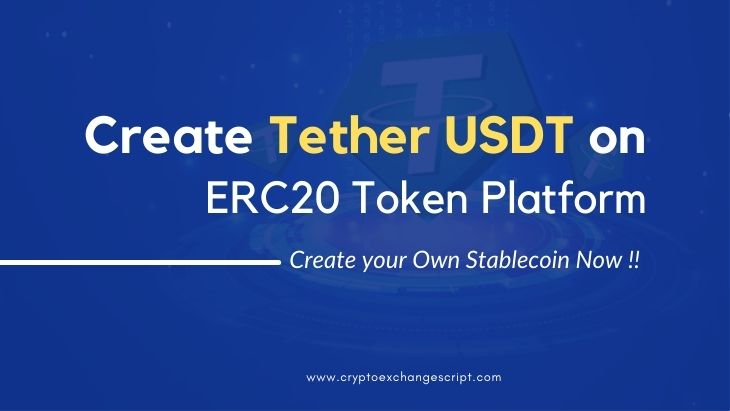 How to create tether(USDT) on ERC20 Token Platform?

Having an idea to create USDT like stablecoin to make your cryptocurrency transactions more secure and faster?

You have come to the perfect place to create your own stablecoin like USDT which makes the digital transactions algorithms using ERC20 token !!

Let’s we get into the detailed explanation of USDT, Omni and how USDT changed from omni to erc20 token?

What is Tether (USDT)?

USDT is nothing but tether, Tether is a blockchain-based cryptocurrency whose cryptocoins in regular circulation. Those cryptocoins are backed by an equivalent value of traditional fiat currencies, like the dollar, the euro or the Japanese yen, which are present in a designated bank account.

Tether tokens are present the native tokens of the Tether network, trade under the USDT symbol.

Why tether is used for crypto transactions?

Tether was specifically composed to build the necessary bridge between fiat currencies and cryptocurrencies which provide stability, transparency and deducts minimal transaction charges to users. It is pegged against the U.S. dollar and maintains a 1-to-1 ratio with the U.S. dollar in terms of value.

How USDT works in Omni Layer?

The cryptocurrency asset USDT is issued on the Bitcoin blockchain via the Omni Layer Protocol. Each USDT unit is backed by a U.S Dollar held in the reserves of the Tether Limited and can be redeemed through the Tether Platform. USDT can also be used to transfer, store, spend, just like bitcoins or any other cryptocurrency, users can transact and store tethers with the presence of Omni Layer enabled wallet like Ambisafe, Holy Transaction or Omni Wallet.

While Bitcoin dominance over the cryptocurrency market is undisputed, Bitcoin-based protocols are slowly becoming less popular. The increase in adoption pushes transaction numbers way higher than what protocols such as Omni, an open-source asset platform on the Bitcoin blockchain, can handle, which is why many traffic-heavy cryptocurrencies have begun moving their coins to other platforms.

To Overcome this issue in Omni layer, ERC20 Token Platform is created to handle the tether based USDT coins.

But now the biggest and most notable tether company that has started to abandon the Bitcoin-based Omni protocol in favor to move the more efficient Ethereum. Anthony Sassano, an Ethereum developer and head of marketing at Set Protocol, pointed out that the number of USDT as ERC-20 on Ethereum has significantly increased than the tether, the total volume of tether is now up to almost 40 percent of the total amount of USDT on Omni.

Why USDT thether coins are created?

USDT and other Tether currencies were introduced to facilitate the transfer of national fiat currencies, which provide users with a stable alternative to Bitcoin and also to provide an alternative for digital asset exchange and wallet audits which are currently unreliable. USDT provides an alternative method to Proof of Solvency methods by introducing a Proof of Reserves Process.

How USDT tether is used by business people ?

USDT offers a solution for a wide range of individuals like business people, investors according to their whitepaper. From day every traders; to long term investors are looking forward to store their cryptocurrencies like bitcoins securely;  Those USDT based cryptocurrencies are used by tech­ savvy shoppers looking to avoid credit card fees or maintain their privacy; for philosophical users are looking to change the world; to those looking to remit payments globally more effectively; to those in third world countries looking for access to financial services for the first time; to developers looking to create new technologies; to all those who have found many uses for Bitcoin.

USDT with the help of Bitcoin Blockchain strives to provide users with a price-stable asset for national currencies in a safe and transparent manner.

Where to build tether USDT as like a stable coin?