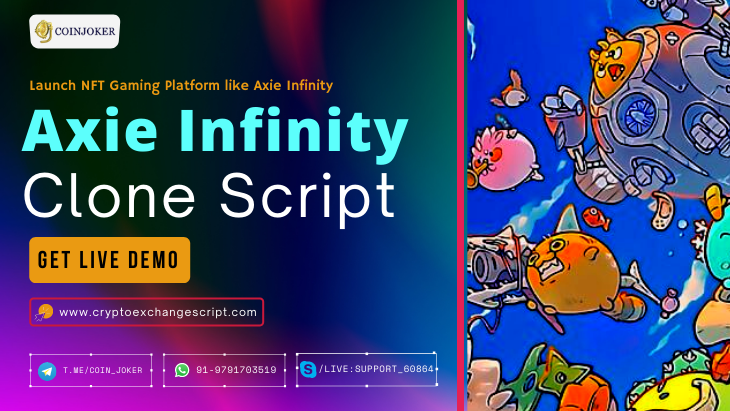 Axie Infinity Clone Script is an NFT gaming script that allows you to create your own NFT Gaming Platform similar to Axie Infinity. Axie Infinity Clone is a battling game where players can collect, breed, raise, trade and battle gaming characters(i.e)Axies. The NFT game runs on popular blockchain technology Ethereum, Binance Smart Chain(BSC), Trons and others. NFT Gaming Development is transforming the way gamers can think about online games and purchase online-game assets through the NFT game platform.

Coinjoker is a leading NFT Gaming Clone Development Company that offers 100% Ready to Deploy Axie Infinity Clone Script which is similar to Pokemon-like game where users need to collect ‘Axies’, that are cute characters each has its own unique combination of body parts, shape and abilities.

If you are looking for an NFT Gaming platform similar to the functionality of Axie Infinity then get Axie Infinity Clone Development services and build the NFT Gaming Platform from scratch.

We Coinjoker has been providing professional NFT gaming platform development services which deliver an amazing trading experience with crypto-collectibles. Gaming networks can now be expanded due to the involvement of platforms such as Binance and Ethereum.

Coinjoker offers a white-label Axie Infinity clone script to match your NFT gaming requirements same as Axie Infinity.  It allows you to collect the gaming assets and provides more efficiency in the overall functionality of the games.

Build your own blockchain-based NFT gaming platform like axie infinity where players purchase NFTs of cute monsters and then battle them against each other.

Players can earn SLP tokens during gameplay and trade those for money at an exchange. It’s fueling a “play-to-earn” movement around the game.

Axie Infinity Clone is a monster-battling game platform like axie infinity where you pit teams of cute monsters called Axies against each other in battles.

The game runs on the Ethereum blockchain with the help of Ronin, a sidechain that helps minimize fees and transaction delays. It's primarily focused on turn-based battles, either against computer-controlled Axie teams or live opponents over the Internet.

You can choose any types of modes, and Launch a NFT Gaming Platform Similar to Axie Infinity.

Breeding
Your axies can be bred to produce another axie that can be sold, bred, or used in battle. Axies have three genes that define their offspring's characteristics. You will spend .002 ETH each time to breed your axie.

Battling
Battle is a turn-based board game in which players attempt to defeat their opponents, with each side consisting of three axies at all times. Each Axie NFT has unique characteristics that make them appropriate for various gaming roles (Health, Morale, speed, skills and also it can be a class like aquatic, moon, reptile, bird, animal, etc..,)

Land
This feature act as the homeland of your axies. The homeland of the Axies called Lunacia and it has divided by plots of land, generate by ERC-721 token.

Marketplace
Trade your axies that are purchase and sell axies through a marketplace. And also you can purchase plots of land, gaming assets and even decorate your land.

Staking Rewards
AXS token holders can stake their tokens in order to get a piece of the AXS inflation.

Governance
Axie Infinity clone is intended to shift to a decentralised governance framework, in which AXS stakeholders assume control of parts of the platform's development decisions.

Purchase Eligibility
In order to participate in future Axie, Land, or item sales, users may need to have AXS.

Arena Mode: will be based on the number of cups they possess, they can receive between 0 and 12 SLP for each battle won.
Adventure Mode: The level of your Axies will determine how many SLPs you can get for each victory, with the average being between 1 and 20.

How do you earn profit in Axie Infinity Clone Script?

Players can cash out the tokens they earn on a regular basis. There are 2 types of token in the game:

Small Love Potion (SLP)- It’s the SLP that the players often earn, and cash out

Axie Infinity Shard (AXS)- The AXS is a proposed governance token which will, when it is implemented, allow owners to have a say in how the game is being developed.

Axie Infinity’s revenue model is currently based on two major sources the sale of in-game items to players and the sale of developer’s shares to investors. The team behind the game has plans for other sources of revenue as well such as advertising and merchandising.

In-game investment - Tokens can be invested in items available in Axie Infinity clone, such as new creatures with better abilities, plots in Lunacia
Axie Breeder - It is possible to create new Axies from two pre-existing creatures, taking characteristics from both parents
Offering scholarships - It offers Axies clone owners the ability to lend their creatures to other players for use within the platform they can start playing and earning SLP immediately.
Converting SLPs- SLP collected can be converted to ETH and transferred to the wallet of your choice

Energy
Each Adventure/Arena battle costs 1 Energy. You can still play any of the modes if you use up all the energy

Axie Infinity Clone Script works similart to Axie infinity where each Axie monster is represented on-chain as an ERC-721 NFT asset, the most common Ethereum NFT token standard after ERC-1155. Each Axie possesses 4 core things, with these being:

Axies Clone Script can belong to either one of the following categories, they are

The characteristics of each Axie will be determined by the body parts they possess, which will directly indicate the abilities to be used during battles

Buffs & Debuffs: Status effects can be applied on Axies through playing skill cards. A positive effect is called a "Buff" while a negative one is called a "Debuff'

Each body part of an Axie has three main genes associated with it:

The "play to earn" concept drives Axies Infinity Clone, which means that each player is rewarded for their participation in the this global NFT gaming platform.

How do gamers play with Axie Infinity Clone Script?

To get start playing with Axie Infinity Clone Script, Gamers need to buy or borrow at least three Axies. Axies are monsters that can be used to battle other players or teams, much like Pokemons.

Players can level up their Axies through the Adventure Mode, where they climb a ladder and go through different levels. Or they can choose the Arena Mode, where players battle with different users on the platform with their Axies.

Players can also start out for free by borrowing Axies from lenders, technically called 'managers' in the game. While these managers are willing to lend out their Axies, they are also entitled to take a cut from the player's earnings. This creates a passive source of revenue for them.

In Axie Infinity Clone Script, two main tokens are available that is (AXS - Axie Infinity Shards and SLP- Small Love Potions). These tokens are tradable on ERC-20 network. AXS is an ERC-20 token designed to reward users for engaging and encouraging users to keep tokens for a long time in order to decentralize platform ownership and governance. SLP are ERC-20 tokens that may be acquired or traded on decentralized exchanges (DEXs) like Uniswap.

Here you can get,

Get A Free Quote For Axie Clone Development

Disclaimer: Coinjoker never has control over the Axie Infinity and their trade mark, also we are not doing any promotional activities for them. We are using the term "Axie Infinity" for easy understanding and identification. Our products and services are not mean to harm any organization or individual.

Axie Infinity Clone Script is an NFT gaming script that allows you to create your own NFT Gaming Platform similar to Axie Infinity.

Q: Why do I need to choose your Axie Infinity Clone Script?  +

Yes, you can make more money on axie infinity clone script. It has a wide range of possible profit like Playing the game for long hours could earn easy profit, depending on your axies.

Q: What are the features of Axie Infinity Clone Script?  +

Q: How can I launch a NFT gaming platform like Axie Infinity?  +

You can launch your Axie Infinity Clone Development with the help of crypto experts. Here you can choose Coinjoker for all sorts of requirements.

Q: What is the use of NFT Game development like Axie Infinity?  +

NFT in Gaming Development where the users can collect, breed, battle, buy and sell axies in NFT Marketplace. NFT gaming platform offers realistic gameplay in the form of Non-Fungible Tokens(NFTs)