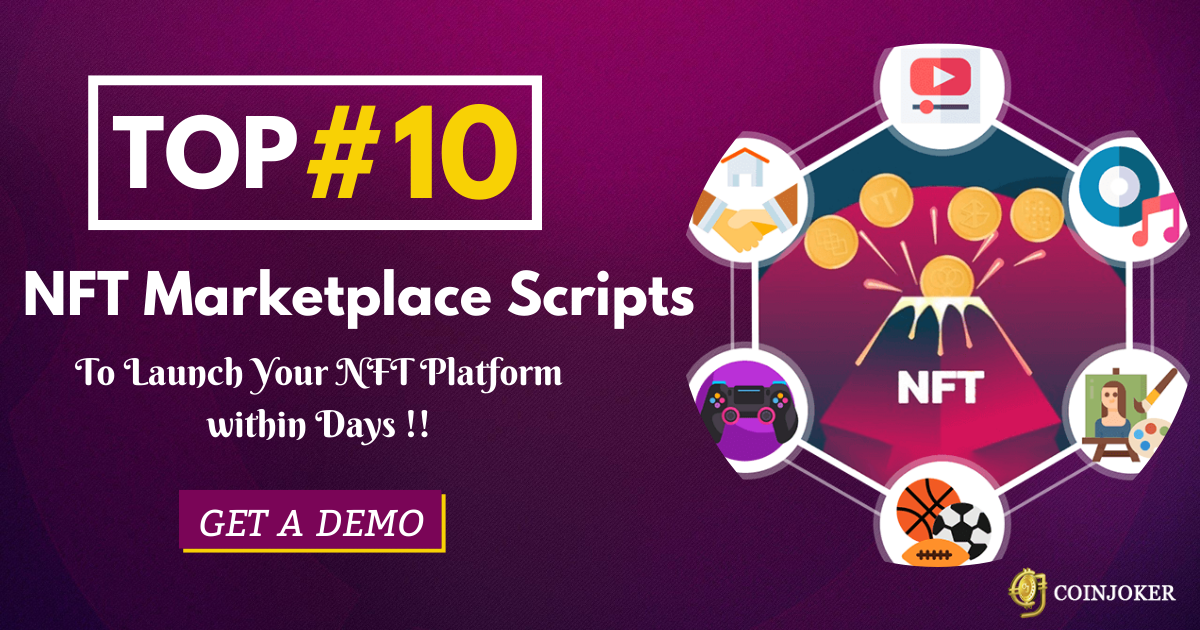 Our white label NFT marketplace clone script is "ONE STOP SOLUTION" for showcase all your unique digital collectibles. It brings NFT Arts all together collectors and creators, allowing them to buy, sell, bidd to make their own profit. Coinjoker helps you to build a decentralized NFT marketplace with Sophisticated NFT Marketplace Script on a public or your own private blockchain like ETH or BSC Network, where creators could transform their DIgital arts into non-fungible tokens (NFT's), collect, and exchange these free of intermediaries and in absolute transparency.

All of Us know that OpenSea is the master among all NFT marketplace platforms. Because OpenSea NFT Marketplace has diverse sorts of digital assets like Music, Art, Image, Clips, and Video is available on its platform, mainly it's free to sign up and browse the extensive offerings this the most effective feature of all NFT Marketplaces. Opensea NFT Platform supports every artist and creator and designer feels like an easy-to-use process if they want to create their own NFT Minting and NFT Tradings

By realizing the usage and demand of opensea, Coinjoker decided to launch a replica of OpenSea called Opensea Clone Script that is much more identical and has the same features and functionalities as opensea and also analyzed and built with the updated features and plugin for digital assets can be bought, sold, or traded by the user from anywhere in the globe

Rarible is the next leader of opensea, everyone is preferring variable after the opensea, because it also has the exiting dashboards features and plugins. Rarible NFT Platform holds all kinds of art, videos, collectibles, and music that can be bought, sold, or created among the various traders. Normally Rarible is built on the Ethereum blockchain (although artwork can be managed on OpenSea as well using Rarible tokens).

Rarible clone script works similar to the NFT marketplace platform rarible, where artists and art collectors may create, sell, purchase, and trade digital artwork and collectibles. From a single piece of art, an artist can make several NFTs or sell it once to transform it into a rare work in the future. Coinjoker's Rarible clone script helps you to create and sell NFT collectibles at the digital art marketplace.

SuperRare is an alternate NFT marketplace platform for digital creators. NFT in the marketplace has different forms including art, videos, and 3D images, but collectors can purchase artwork using Ethereum. SuperRare NFT Marketplace has recently launched its own NFT token of the same name built on the Ethereum blockchain. These newly launched NFT tokens will be used to find and curate new talent for the marketplace.

SuperRare Clone is a NFT Marketplace script where creators and artists can collect and trade digital arts and NFT collectibles. Coinjokers's offers an advanced SuperRare Clone script that has the same functionalities in the present superrare developed with an attractive Graphical User Interface(GUI) and it has a lot of range of options of NFT marketplace development same as Super Rare which creates a seamless experience.

Zed Run is an online digital horse race gaming platform that works with several such events and tasks takes place every hour, seven days a week.  Zed Run is a blockchain-based racing game website that lets players own, raise and breed horses and participate in competitions digitally. The Players of the NFT Game platform can Race, breed, own, earn, win.

Zed Run Clone is a Blockchain-NFT Based Digital horse racing game clone to start a virtual horse racing platform like Zed Run with similar plugins and functionalities. Coinjoker offers a ready-made and white label Zed Run Clone Script which helps you to build a digital horse race game at an affordable cost. We guide you to launch a NFT Game Platform within days.

Decentraland is a digital world that can be built by an Ethereum blockchain. The virtual world has been developed and is owned by its users, who can create, experience, and monetize content and earn revenue also. In the Decentraland  the virtual world allows to play, explore, and interact with games and activities

Axie Infinity is a blockchain-based NFT game in which players buy NFTs of cute monsters and then pit them against each other in battles. Axie Infinity is the name implies that collecting axies countlessly of creatures and a game about gathering and raising fantasy creatures called Axie

Ghostmarket is the first-ever NFT Marketplace platform that works using cross-chain platforms. Creators and artists can explore, create, sell and buy NFTs using various blockchains. NFT Trading happens due to the smart contract on integrated blockchains. Ghost market is a sports-based platform where the selection of features wrapped in a gorgeous and has an intuitive user interface

GhostMarket Clone is the first cross-chain NFT marketplace where artists can sell, discover, create and buy phantasma & NEO & BSC Collectibles. Our Ghostmarket clone script is completely customizable as you want. It helps you develop a user-friendly marketplace and you can add more features if you want to provide additional options to your digital artists.

AtomicMarket is a smart contract-based NFT Marketplace Platform which can be used by any marketplace user to buy and sell AtomicAssets NFTs using a shared liquidity pool. AutomicMarket is a marketplace for atomic assets on eosio blockchain, with non-fungible token standards. Leading high scale NFT platform for creating, trading and buying / selling NFTs that is already used by millions of loyal users.

NBA Top Shot allows traders to buy, sell, and collect NBA NFTs that to display the influential “Moments” minted on the FLOW blockchain. NBA Topshot is an NFT marketplace platform from Dapper labs that allows the purchase and sale of arts, images, video clips, player cards and other collectibles in the form of NFTs

Sandbox is a virtual NFT Gaming and NFT Marketplace script world where players can build, own, and monetize their gaming experiences on the Ethereum blockchain. A sandbox NFT game is also known as an open-world or free-roaming game. Sandbox works using an ERC-20 metaverse gaming token. It is the native token of The Sandbox, a play-to-earn blockchain game with NFT in-game

The major thing is, at Coinjoker, we transparently work with our clients. As a result, you will be kept informed about the progress of each phase in the NFT Marketplace development platform. We conduct meetings with you to better understand your business needs and strive to create a user interface that enhances user engagement. We give complete customization services to meet your needs and make it look like a classy & user-friendly platform.

Our Wallet Creation For NFT Development

Features of Our Wallet Development

Get A Free Live Demo for NFT Marketplace Clone Script

Coinjoker neither represents nor has command over the trademark of "NFT Marketplace Clone". We have mentioned the brand names here for a clear understanding to our clients. It is important to understand that we do not promote, copy and collaborate with them.