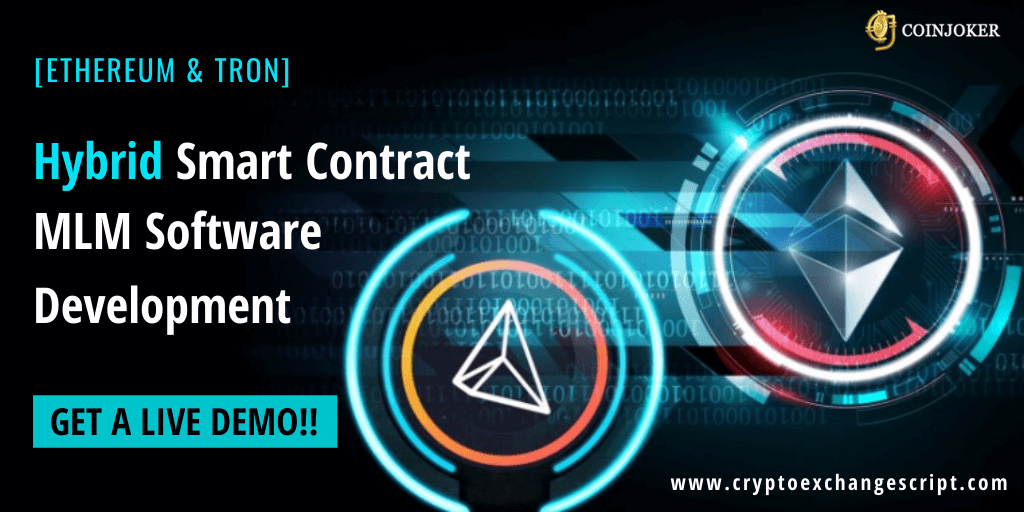 MLM (multi-level-marketing) is one of the most promising investment opportunities for those who are looking to make money in the cryptocurrency business. Generally  you will find many smart-contract-based MLM networks built on blockchain like Ethereum and TRON. Hence there are many popular Smart Contract based Crypto MLM platforms built on ETH or TRON.

Coinjoker's Hybrid Smart Contract MLM software on Ethereum and Tron Network makes it simple for you to quickly launch your smart contract-based MLM platform within 4-5 business days. Our Hybrid Smart Contract MLM Software is embedded with both working features of TRON and ETH blockchain, with separate contracts, tree structure, and separate dashboards with a cost-effective budget, ready to deploy, and easy to launch solutions.

Let us first look into the definitions of smart contract MLM, it's working on different blockchain networks,

What is a Blockchain Smart Contract?

In simple Smart Contracts are the self-executing contacts powered by cryptocurrencies with various blockchain. A set of digital codes are used to construct every term and condition,  and the code runs on the blockchain-based platform. This Blockchain network executes each and every transaction in a transparent and traceable manner.

Smart Contract-Based MLM is Decentralized MLM Networks that can be governed or handled by any blockchain smart contract. A smart contract is a computer protocol that allows the performance of credible transactions in a trusted manner with an agreement, without any involvement or access of third parties.

When MLM Platforms are implemented with Smart Contract, it is fully encrypted and automated under a blockchain algorithm.MLM business with smart contracts helps to solve the issue of mistrust among the users which was a great advantage over traditional MLM. Thus Smart Contract based MLM business provide complete trustworthiness among users while enhancing transparency.

Why Should Integrate Smart Contracts in MLM Platform?

1. They are reliable since once programmed they cannot be changed/ hacked
2. Simple and Easy Transactions
3. Cost-effective - No Extra or Additional Fees
4. Processing speed is much higher than a traditional method of contract
5. Highly Trusted International Transaction
6. Peer-to-Peer Systems
7. No third party involvement.

To Get Detailed Insights about Ethereum Smart Contract MLM Software>>

By using this Ethereum Blockchain network, anybody can create DEX MLM Platform with customization dependent on  their own business needs. This helps the MLM business people to build their own decentralized MLM platform incorporated with the Ethereum based smart contract that has its own qualities.

The Following are the tools/frameworks used for Ethereum Smart Contract MLM Development: 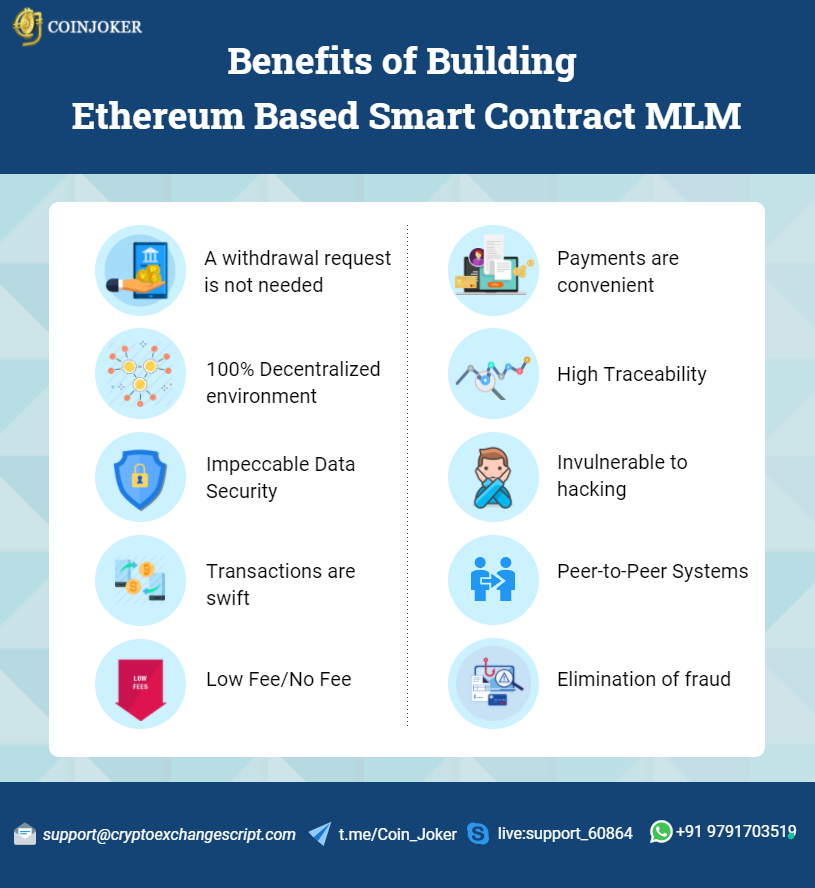 MLM platform on Tron smart Contract will be done using Ethereum solidity language, which comprises of TRON's own features and plugins. Thus the developers who have experience with solidity can straight away create smart contracts on TRON's network.

* Tron based Smart Contract MLM Platform creates trust among the users thereby expanding the user base
* Tron Smart Contract based MLM is as reliable as the one that built on the Ethereum blockchain.
* TRON smart contract MLM software can be customized according to the owner's need.
* No gas fee is required in an MLM platform built on the TRON network. Thus the owner can get high ROI over each and every transaction.
* TRON based Smart Contract based MLM promises high-end security.

* Tron based MLM platforms initially charges low entry fees.
* Active participation and referrals can create high-profit revenue for the users
* There are also many gifts offering schemes for the users, other than rewards
* TRON creates the safest choice of investment for the users
* Initially, the TRON Smart Contract MLM platform rewards the users with a certain amount of TRX

Combination of TRON & Ethereum Smart Contract on a Single Platform

As the usage of TRX- Stable coin of TRON has increased in recent times,the craze for TRON has also increased among the cryptopreneurs when compared to ETH. The major advantage of TRON over ETH is tha subsequent "Gas " fee, implemented by TRON protocol. Eventhough Tron blockchain seems to be better than ethereum still many of the traders prefers ethereum blockchain.

Ethereum smart contracts was the first to build up in the market, most of the companies now use the Ethereum platform to create a contract.

Ethereum has created its very own programming language – Solidity

Coinjoker- As a leading Smart Contract MLM Software Development Company provides Hybrid Smart Contract MLM software that empowers your MLM business platform with the adoption of both smart contracts blockchain (ETH & TRON ) to move towards an advanced future. This Hybrid Smart contract-based MLM Software is designed in a way that the MLM Platform carries out all the transactions with more security and speed. This platform carries both the options of ethereum smart contract as well as Tron smart contract with their corresponding features, structure, contracts, dashboards, etc,. thereby allows the users to easily switch over to the particular blockchain network which they want to use.

Our experienced blockchain developers builds your MLM business gets the best results and implements both Ethereum and Tron smart contract solution in a perfect manner. We assist you to build MLM business at minimum expense and equip the platform with the most exploring business modules.