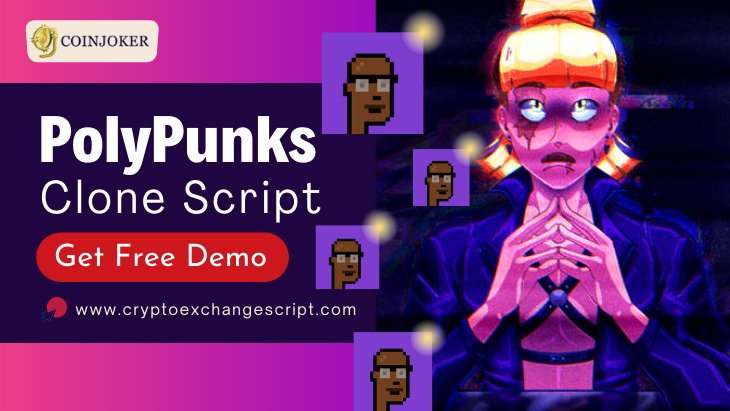 Coinjoker is a premium NFT Development Company, creates a PolyPunks Clone Script that allows you to create your own PolyPunks that look exactly like NFT Collectibles. PolyPunks is a new NFT project that aims to increase the visibility of NFTs on the Polygon network. There is no first-come, first-served policy; everyone has an equal chance of getting rare punks like apes, zombies, or aliens. Until your transaction is finalized, the PolyPunks' identity will remain a mystery.

Marketplaces
Once the minting is completed, the PolyPunks will have access to a special marketplace. After 10,000 polypunks are sold, a large number of PolyPunks characters can be obtained.
Rarity
Everyone can gain rare punk characters like zombies, aliens, and apes. Until a purchase is made, its identity remains a secret to all.
Random Punks
Random purchases are available in PolyPunks, as it provides a fantastic opportunity for people to possess many PolyPunks.

PolyPunks overview and how it works?

PolyPunks is a well-known NFT Collectible that is held on the polygon blockchain network. It contains 10,000 distinct characters, each with its own distinct feature. It debuted on June 11th and features a variety of punks on various chains.

The PolyPunks NFTs' attributes are extremely rare, and they illustrate the scarcity of NFT collectibles. It can be sold, collected, purchased, and offered as a gift.

The appeal of the PolyPunks NFT collectible is due to a number of interesting elements. Let's look at a couple of them.

PolyPunks has its own marketplace, giving it complete functional control over the project.

Get a Free Demo of PolyPunks Clone Script