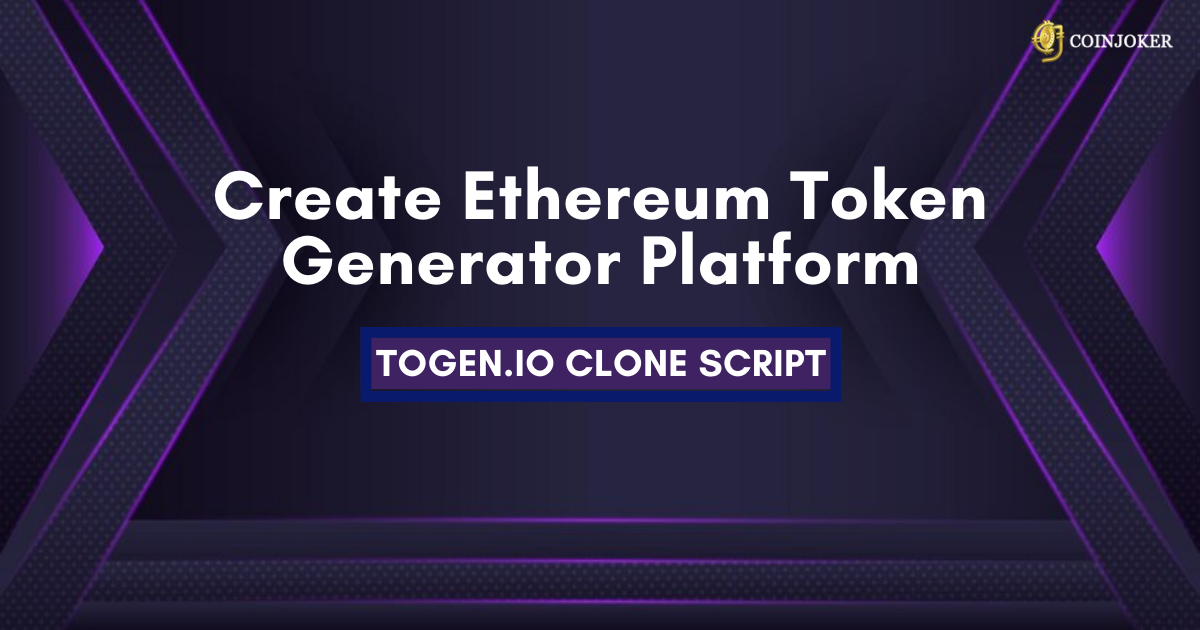 Togen.io Clone Script - To Create an Ethereum Based Token Generator like Togen.io

Togen.io clone script is a readymade Ethereum token generator website script that is a quickest and safest way to create Ethereum-based cryptocurrencies that are backed by your business, brand, property, loyalty points, or movement. The basic features of the Togen.io Clone script include the ability to generate Ethereum-based tokens and crowd sale campaigns, where users can produce Ethereum tokens without any programming coding experience and with the help of anyone.

Get A Free Live Demo of Togen.io Clone Script

Coinjoker, a leading Token Generator Development Company, offers a Togen.io Clone Script that is ready to use. You won't have to login, set up, or code anything if you use our togen.io clone script. We can assist you in developing your own token generation platforms, such as a Togen.io clone with an ICO platform, SmartContract with WhitePaper, and other complex features.

The self-executed ERC tokens are simple to create since they have built-in program code that makes it easy to mint Ethereum tokens without the requirement for a programming language. The Ethereum tokens may be automatically constructed and developed from scratch as per the user's requirements in the Token generation platform, and they can also set the supply value of the aforesaid token. If necessary, the crypto coins can also be employed and executed in ICO business platforms.

The Coinjoker ERC20 Token Generator Platform Development solution was created for those who wish to make a name for themselves in the cryptocurrency and blockchain markets.

Features of our Togen.io Clone Script:

The Token Generator Platform is a location where users may create tokens quickly and easily in a matter of minutes. Users of the token generation platform do not need to know how to code because the default code will be used in each phase. Using the Ethereum token generation platform, several sorts of tokens can be created and used in any situation. Let's take a quick look at how a token-generating platform works and how it functions.

The Token Generator Platform makes it simple to produce a variety of different tokens. So, in essence, a token generator provides a means of manufacturing several sorts of tokens in one location, which is a very convenient and appealing feature for consumers.

Launch our own Token Generator platforms like Togen in less time

You can launch right now, or later if you choose. We have a ready-to-use ERC20 Token generating platform that can be installed on your live server in as little as 24 hours. Isn't it a simple and quick procedure?

Get A Free Live Quote of Togen.io Clone Script

How to build an Ethereum Token Generator Like Togen.io?

Expert consultation and appropriate ERC20 Token Generator development support are required to launch an ERC20 Token Generator Platform like Togen.io. Another cost-effective option is to buy a Togen.io Clone Script and customize it to your specific business needs. WhiteLabel Togen.io Clone Script with comprehensive business functions and security features is available from Coinjoker.

Get A Free Live Demo of Togen.io Clone Script