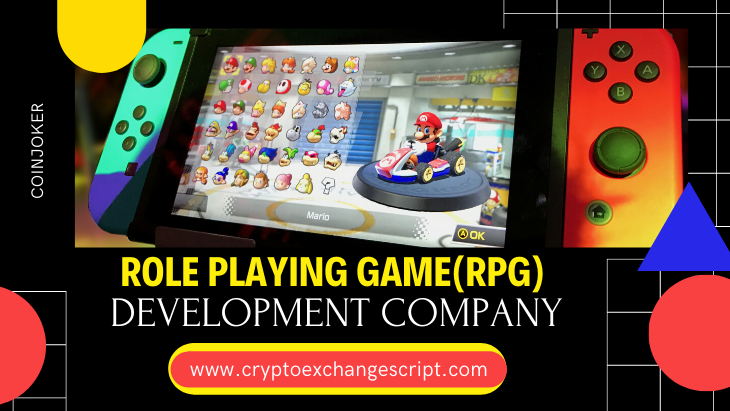 What is Role-Playing Game?

A role-playing game (RPG) is an online game in which each participant assumes the role of a character, generally in a fantasy or science fiction setting, that can interact within the game's imaginary world.

Those Players take responsibility for acting these roles present n the game within a narrative, either through literal acting or through a process of structured decision-making regarding character development.

Role-playing game (RPG) Development is a genre of video game solutions that helps to create your own online gaming platform where the gamer controls a fictional character (or characters) that undertakes a quest in a digital world.

Coinjoker is a Superior Game Development company offer Role Playing Game Solutions where users in the platform play a version of a game that includes access to a persistent world online through the game's interface. We build Role-Paying Games (RPG) with the high knowledge of blockchain developers with various verticals like artificial intelligence, 3D graphics, animations, audio effects and several other components that offer an elegant presence for online games.

Get A Free Live Quote For Role-Playing Game Development

There are many types of Role Play Games (RPG) that are developed in various locations and with different gaming styles. Early on, there was a big difference between Japanese RPGs (JRPGs) and Western RPGs because of access to different types of computers and cultural variance. Final Fantasy is one of the most beloved JRPGs. Today, most RPGs are globally available.

Video game console RPG's includes game mechanics and, frequently, settings derived from those of traditional role playing games. Currently, there are many options for consoles, from Xbox to Nintendo and Playstation. Current video game consoles can handle high-production games with tons of minigames and side quests.

This is a game where you play through one perspective and often use character creation screens so the player can customize their avatar with various characteristics. The best RPGs have many paths to take throughout the game, so every time you play is a new experience.
Massive multiplayer online RPGs (MMORPGs)

Combining elements of Massively Multiplayer Games (MMOs) and RPGS, these games have epic showdowns and battles between various players in the market.
Fortnite, World of Warcraft, and League of Legends are among the most popular of this kind of multiplayer RPG.

The fights happen in real-time and gamers can flex their quick response battle skills. Some MMORPGs are co-op games, meaning gamers work together with party members to defeat opponents.

Games where battles take place on a map and character units are deployed against opponents.
Character and party development are more important than battle choices since stronger, higher-leveled enemies tend to overwhelm underdeveloped parties.

With a heavy emphasis on combat, this genre of RPG tends to focus more on battles and less on character or story. Examples of action RPGs with popular combat systems include The Legend of Zelda, Dark Souls, and Mass Effect.

These RPGs are designed for world exploration and take the longest to finish because they’re so big and complex. Some of the popular RPGs of this style are The Elder Scrolls, Disco Elysium, and the Fallout series by Bethesda Softworks and Interplay Entertainment.

This kind of RPG takes the most inspiration from strategy games like chess and tabletop war games like Risk.

This role-playing subgenre is characterized less by theme or style, but by gameplay elements. Some of the common rogue RPG elements are a dungeon crawler character who navigates complex levels, permanent death of the main character, and randomized content.

Coinjoker creates a customized a Role play Game platform development gamers should be able to
find new parts of the RPGs through different characters and pathways, with other plotlines determined by how well they do in battles.

Origins: In this game, you role play as a rogue, warrior, or mage and join the Grey Wardens order. As you travel through the fantasy world of Ferelden, you work to beat the Archdemon.

This science-fiction RPG takes place in the year 2052, where several companies struggle to control the world.

This Square Enix franchise is a Japanese series of games. Each game features a new set of characters, locations, and plots.

In this dark fantasy game from Obsidian Entertainment, you start as a Watcher who can talk to people’s souls. The game also allows a lot of choice in character design, so you can play many times in the storyline.

The Old Republic: Developed by BioWare, the game begins during a moment of tenuous peace. You pick a single character and play as a Jedi Knight or a Sith Warrior, giving players the choice between the Galactic Empire or the Sith Empire. The combat is important, but the characters and the ability to make choices are, too.

This is an open-world sci-fi RPG with re-releases and sequels. The original game is heavily based on tabletop role-playing games, and it keeps getting bigger and more ambitious with each subsequent version.

The inspiration behind the popular Netflix series The Witcher, this open-world action RPG, which has a strong fanbase, tells the story of Geralt of Rivia. The game comes from Poland and started as a computer RPG.

Where to build your own Role Playing Game Development?

You can be an owner of Role Playing Game (RPG) platform with the best gaming platform development company, Coinjoker has a team of well knowledgeable developers with the well- advanced techniques.

We have an unshaken background in aligning various level-ups, combat systems, in-depth character customization based on a specific narrative, theme or storyline. Coinjoker specializes is using various 3D isometric engines like OpenSpace for MMO communities and virtual world creations.

We are a leading NFT Game development company and also have expertise developing RPG games across platforms and leveraging upon available game engines, multiplayer game supporting servers or use of tools and frameworks: