All of you know about Telegram is one of the fastest and largest growing social network evenly using in messaging apps also. Which now be used for the first time to make transactions with cryptocurrencies. Telegram raised almost $1.7 billion in two private token sale rounds. It is second only to EOS’ record-breaking $4 billion ICO.

When the launch of the Telegram Open Network (TON) initial coin offering (ICO) was announced back in December 2017, the blockchain industry sat up and took notice, in a big way. At the time, not only were Telegram among one of the first companies with an existing and successful non-blockchain product to suggest launching an ICO; but more importantly, Telegram were already well regarded in the crypto industry as being the go-to platform for ICO community building initiatives and messaging.

How ICO introduced TON and GRAM

TON ICO hard cap was raised to $1.7 billion, met shortly after, at which point the Telegram ICO was closed prematurely. In fact, Telegram’s raise ended before it ever reached its public sale phase. But despite Telegram’s early end to their ICO raise, the TON platform still became the second most successful ICO by amount raised in history.

However for some investors, to whom the ICO public phase was closed, the opportunity to invest in GRAM, the Telegram Open Network’s proposed native token, was scarcely recognized.

An Introduction about Telegram Open Network(TON):

TON will feature its own native chain, called the TON Blockchain, and likewise its own cryptocurrency, the GRAM coin; along with the TON virtual machine for smart contracts, and its own consensus mechanisms.

TON’s white paper, which was reportedly distributed among investors around January 2018, the TON platform will be much more scalable when compared to bitcoin and ethereum. The TON platform will allow it to compete with giants visa and Mastercard in terms of transaction speed.

To achieve high such levels of scalability, TON purportedly relies on built-in support for sharding, a process that allows the splitting and merging of blockchains automatically to streamline transactions under increased loads.

Additionally, TON employs a technology called “instant hypercube routing,” as per the recent report, which also “aims to ensure that transactions are processed swiftly notwithstanding the size of the system.”

An introduction about GRAM:

GRAM coins are like the native unit of crypto exchanges for the TON blockchain, it just like ETH is to Ethereum. Telegram’s native coin will be used for many activities within the blockchain platform, such as payment fees, micro-payments, giving access to decentralized applications, and TON platform attaches its ‘value’ to messages which have been sent through the existing Telegram Messenger app.

When Telegram launched their private ICO, it was offered to investors through a SAFT agreement for GRAM tokens.

Estimation of GRAM and its price value:

TON’s in-house cryptocurrency is called gram. According to information presented in Aton’s research, the total supply of gram tokens “will initially be around 5 billion,” while the expected inflation rate is set at 2%, meaning that the total supply of GRAMS will double to 10 billion in 35 years. The projection for the number of tokens in circulation all the way to 2028 can be seen below: 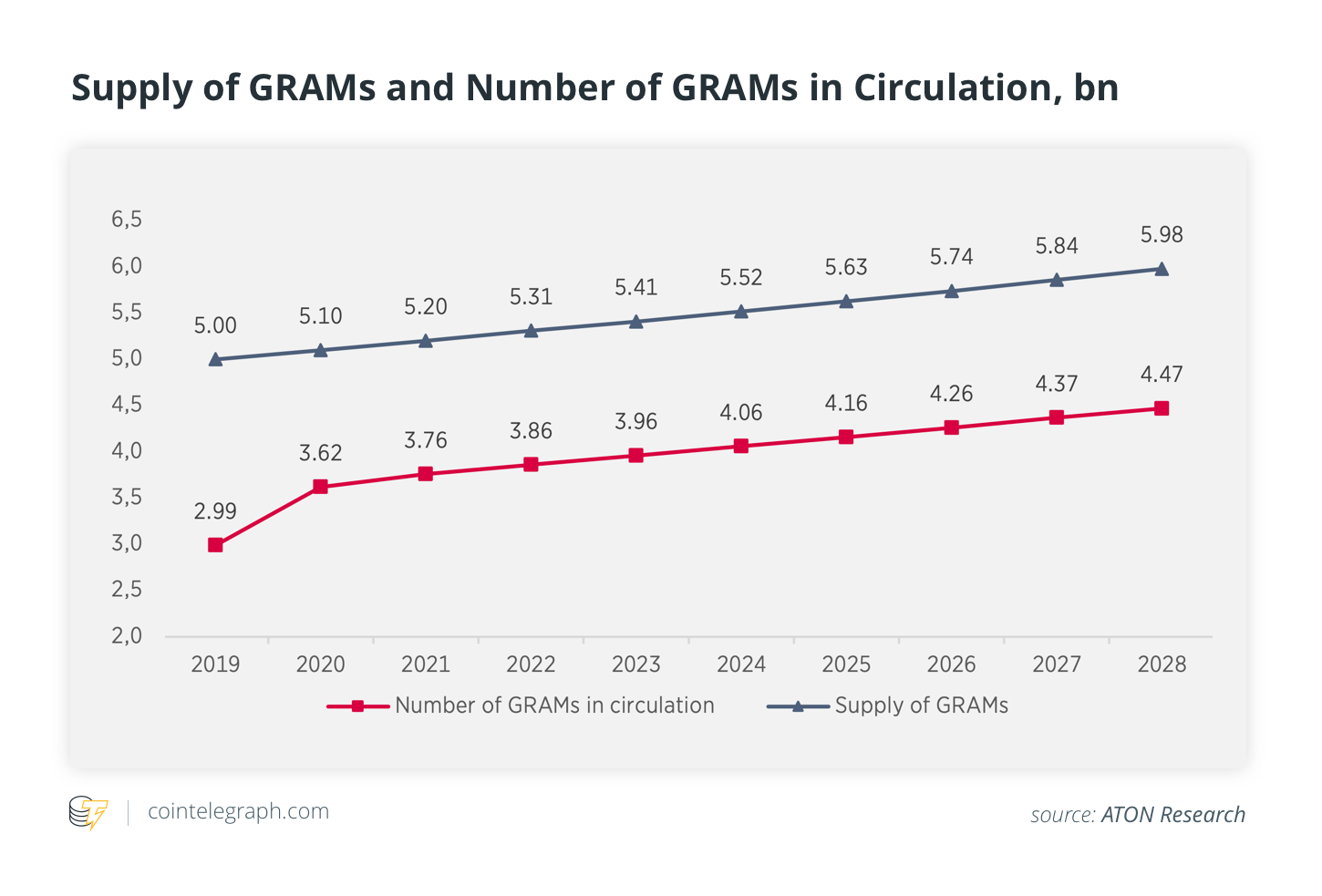 Since the gram token is not being traded publicly, it is difficult to estimate its true price. According to public sources, cited by Aton, during the second private funding round, the average price of gram was $1.33. 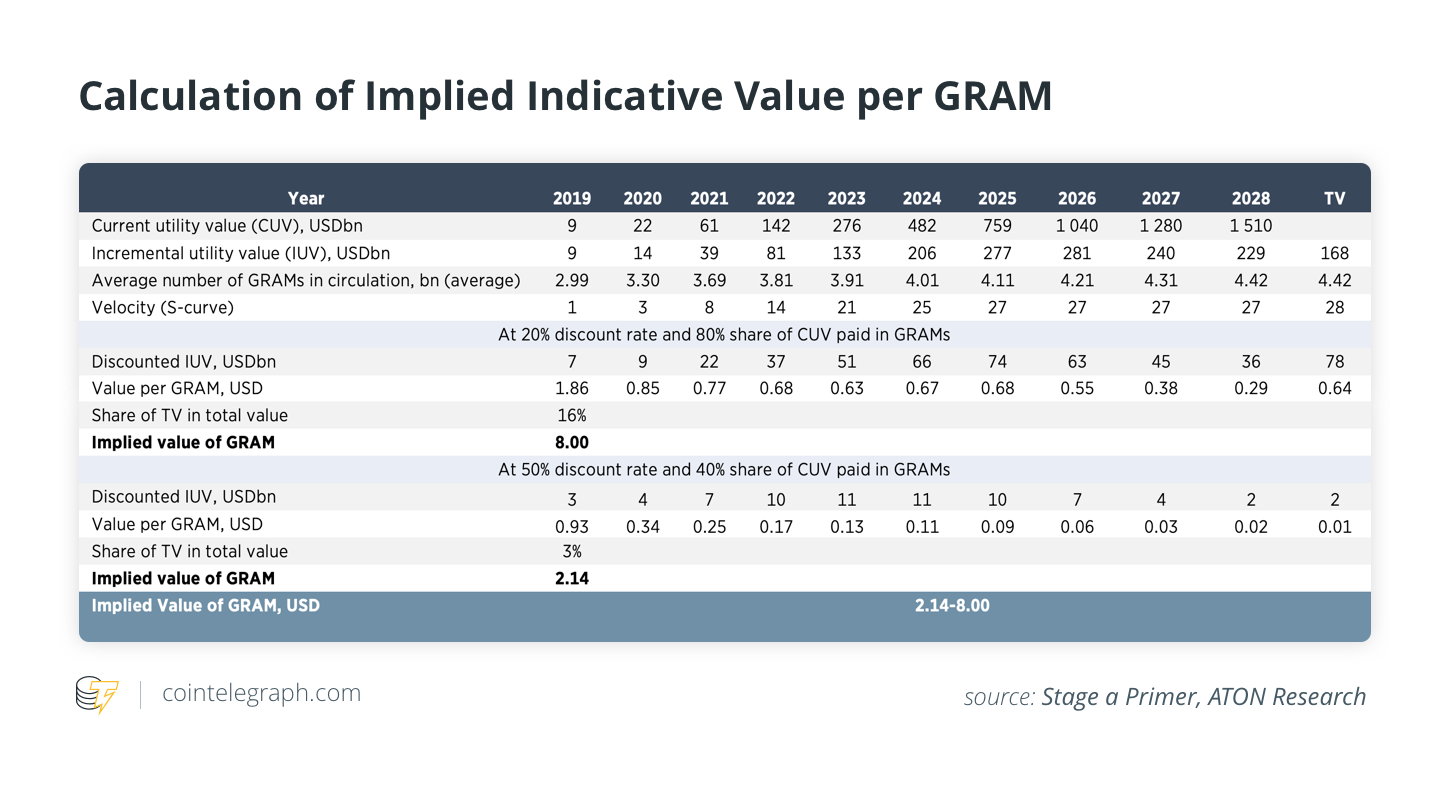 According to the Aton paper, the TON network is comprised of the following components:

TON Storage is described as “the file-storage technology available for storing arbitrary files with torrent-like access technology and smart contracts used to enforce availability.” The feature will reportedly be used by DApps that require large amounts of storage.

TON Proxy is the network’s anonymizer that will be used to hide the identity and create a decentralized virtual private network (VPN) to secure online privacy. The ultimate goal is “to guarantee to any service including Telegram immunity to censorship,” the paper mentions.

TON Services is presented as a platform for third-party DApps, smart contracts and a decentralized browsing experience.

TON DNS is a service that will reportedly “allow users to access decentralized services as easily as browsing the World Wide Web” by assigning accounts with human-readable names.

TON Payments will allegedly support instant off-chain payments inside the network. It also features built-in safeguards that aim to provide security when making transfers, making sure that these transfers are “as secure as any on-chain transaction.”

TON Virtual Machine is described as a component that processes smart contracts on the network.

TON wallets will reportedly be built into Telegram mobile and desktop clients, with millions of users being able to store their funds in TON’s network when it goes live. Integrated with Telegram apps, the TON wallet may become the world’s most adopted cryptocurrency wallet according to its creators.

TON’s chief competitive advantage is Telegram’s ecosystem, which could offer simple ways to buy gram tokens and provide a range of services to spend them on to a vast audience, part of which cryptocurrency enthusiasts already comprise.

Telegram is allegedly considering an option to allow compatibility with other major existing cryptocurrency wallet custodians, gram is reported as the primary means of transacting.

Telegram’s ecosystem, in turn, which supports bots as well as other popular features like group chats and channels, could represent “a ready market for paid content and subscription services as well as physical goods,” the paper’s authors argue.

If you have to build Telegram Open Network (TON) and GRAM token to enhance your scalability in cryptocurrency transactions?

Want to assist to build TON cryptocoin and gram on cryptoexchanges ??

Fill out the form below for your quick response !!