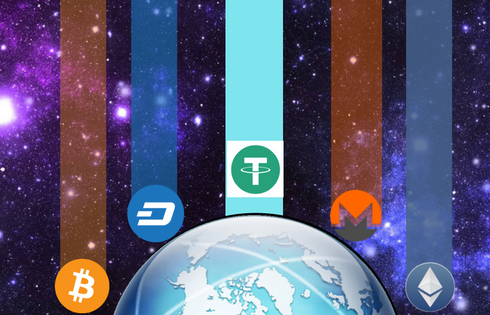 Top 5 Hottest Cryptocurrencies And Their Dominance!

Why Cryptocurrencies Are Facing Continuous Growth?

According to the current political events and the peoples lessen trust among fiat currencies lead the cryptocurrencies to grow very fast. Cryptocurrencies don't have any central authority to make a transaction and hence they treated as an open source without any controversial rules and regulations.The modern economic industry welcomes the cryptocurrencies with red carpet since people seeks the change in the economical industry.

The growth of cryptocurrencies marketplace mainly depends on the growth of following crypto coins.

The tether was launched in late 2014, with the main focus of keeping a stable value. The coin is just like bitcoin but it has two major differences. First one is tether has already pegged at fixed price 1 USD and you need to provide some personal information to make a trade and just to pass KYC/ AML regulations.

Tether doesn't have its own blockchain to store transactional records. Instead, it runs on a platform called Omni layer built on top of bitcoin.

Its original name was dark coin when it was published at 2014. Uses the x11 hashing algorithm. It's just a modification to the SHA – 256 mining algorithm which bitcoin uses. Currently, each dash Is worth up to $15.

It is a privacy-centric crypto coin launched in 2014 with the name bitmonero. Monero was the first crypto- note based altcoin. The main difference between bitcoin and crypto note based altcoins is that the implementation of block chain is much opaque. Bitcoin transaction through blockchain allows the traders to see which addresses sent what amount but the crypt-note based altcoins makes it impossible to track transactions. So here we can trace the approximate amount of transaction. The value of the monero is currently closed worth of $12.

Ethereum acts both as a currency and a platform. Initially, it was published In 2013, by Vitalik Buterin. And it is blockchain based application development system. There is a split up in the etherium which we called as ethereum and ethereum class is due to the DAO fork in 2016. currently, bothe ETH and ETC have healthy trading volume.

Hope there is no need of introduction since we discussed a very lot in the previous articles. It created before 8 years ago. From the date of invention till now it has to rule the cryptocurrency network. The market cap of bitcoin is whopping above $15billion. Currently, the value of a bitcoin is 1030$ approximately.

Why Bitcoin Alone Is Still More Popular Then Other Cryptocurrencies?

The popular cryptocurrency bitcoin has a lot of security features, decentralized and hence no fee for bitcoin transactions. Also, it earns a lot of bitcoin enthusiasts and influencers over the network. The above highlighted features are the only reason which makes the bitcoin to different from other cryptocurrencies.

What Is The Best Bitcoin Business Right Now?

How Can You Start Doing Bitcoin Exchange Business?
Learn more about
Coinjoker offers you a better bitcoin business solution in the name of cryptocurrency exchange script.Using the advance exchange script. You can quickly setup your own bitcoin exchange platform with no flaws.